Gargnano and the Bandit Zanzanù 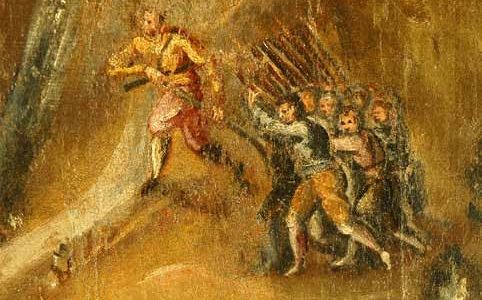 One of the most tragic yet fascinating stories from the area is about the Bandit Zanzanù.  It has been passed down as a legend and details one of the most infamous outlaws of the Serenissima Venetian Republic.
Zanzanù, whose real name was Giovanni Beatrice, was born in 1576 in Gargnano, not far from the Church of Saint Francis. Plots, disagreements and family feuds, which were widespread at that time, led him to be first banned from the town in 1602. From that moment on his story was studded with daring adventures and dramatic events within the Alto Garda area, including that of his native Gargnano. In his hometown his father was murdered while walking under the loggia of its municipal building, his wife resided there until their home was confiscated and destroyed, and his loyal friend and ally, Friar Tiziano of the Gargano convent, lived there.
The bandit’s story ended on August 17, 1617 when he was captured and killed in the Tignale mountains.

Ex palazzo Municipale
LOCALITÀ: GARGNANO   Nella piazza di Gargnano, vicino al porticciolo, sorge...
Leggi
DENERVO - A PLACE OF MAGIC ATMOSPHERES
In a much variated territory like this, containing on little space rocks, hills and high...
Read more
ON THE PATH OF WONDERS
The excursion to the hermitage of S.Valentino is a must for everyone wants to know not...
Read more
WANDERING ON D. H. LAWRENCE TRACKS
David Herbert Lawrence, celebrated English poet and writer, author of the famous “Lady...
Read more
The Old Town Hall
LOCATION: GARGNANO   The old town hall stands in Gargnano’s square, near the...
Read more