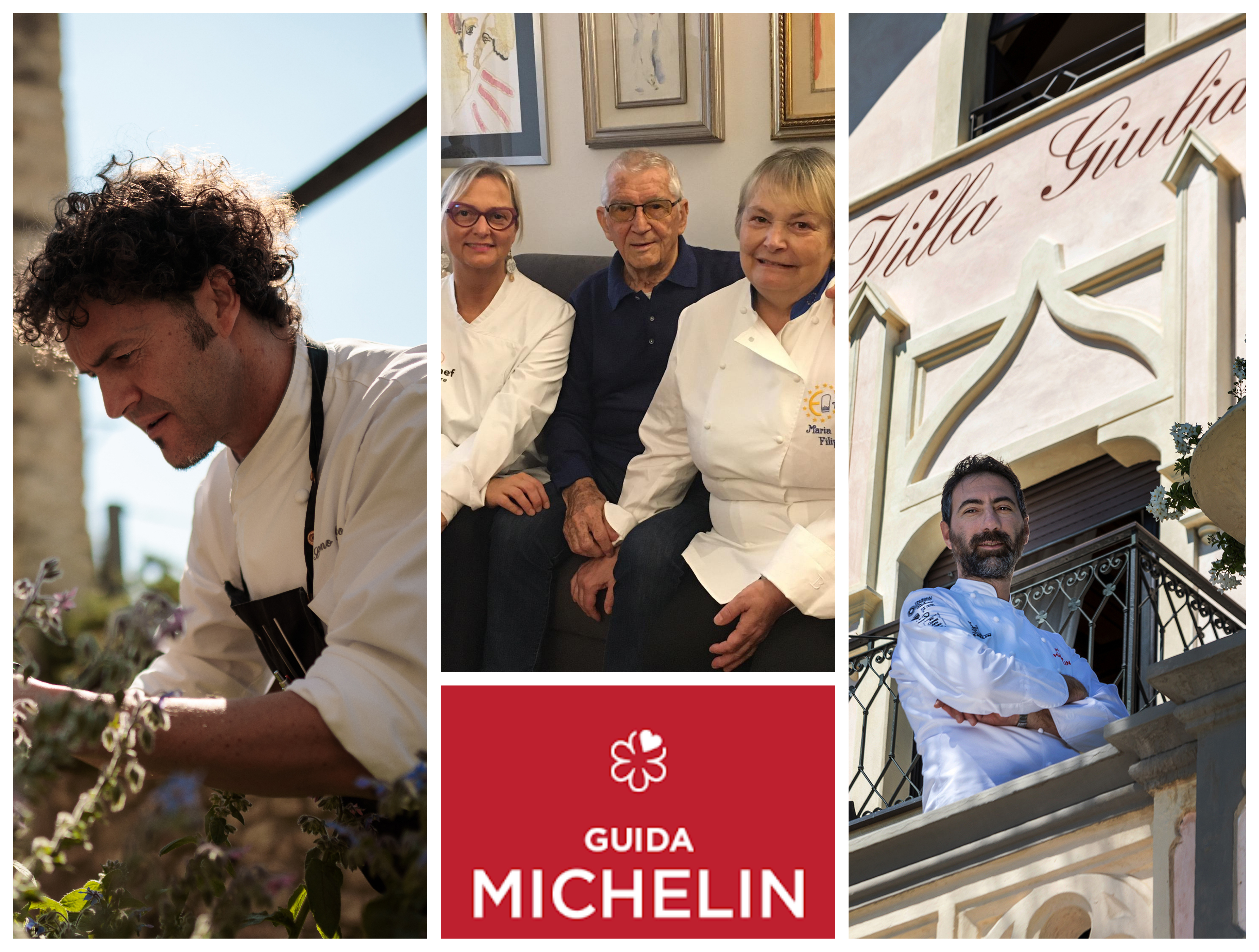 Gargnano’s atmosphere shines brightly! With three restaurants here that, though only 500 me-ters apart, have each achieved a Michelin star, the Gardasana town is distinguished by its culi-nary “Walk of Fame.”

There are nine Michelin-starred restaurants on Lake Garda, seven of which are located within the Brescia area. Of those seven, three are in Gargnano, a small town whose inhabitants num-ber less than three thousand and that, remarkably, does not yet appear among the noted de-stinations of mass tourism. The neighboring areas are larger and more widely-known, but for those who live or work in Gargnano its undiscovered potential is a true mystery.  Visitors who stumble upon it by chance find an surprise, hidden gem: a tiny town that has everything. Its cu-linary traditions top the list of “musts” it offers.

Three restaurants, for a total of four Michelin stars.
The most longevous star is undoubtedly the one that shines for the historic restaurant “La Tortuga”: the Filippini family has been running it since the early Seventies, earning their first star in 1980, when the Michelin Guide bestowed the merit on Maria and her husband, Danilo, for their talent and dedication in the kitchen. This year La Tortuga celebrates its record of 41 consecutive years of Michelin recognition but, despite the milestone, the Filippini family continues to work with their characteristic modesty, which has always kept their feet on the ground.

Two stars adorn the restaurant of the Grand Hotel A Villa Feltrinelli: the credit goes to the chef from the Marche region, Stefano Baiocco, who, after years of professional exploration and in-ternships at starred restaurants around the world (he worked for some of the greatest chefs in Paris, Japan, Hong Kong, the United States and, of course, in Italy), decided to embark on a new adventure in this wonderful place on Lake Garda. In Gargnano Baiocco works as executive chef, devoting himself to an aesthetically extraordinary cuisine, based on elegance and lightness, in which he offers numerous aromatic herbs and edible flowers that he himself grows in the villa’s garden. A striking example of his love for vegetables is his “Simple Salad”: a dish where 130 dif-ferent salad leaves, sprouts and herbs are combined with 30 types of flower petals. Does the quality of Gargnano’s extra virgin olive oil and citrus fruits give that extra special something to his creations?  Yes!

The third Michelin-starred chef is at the restaurant of the Hotel Villa Giulia - and he certainly knows a lot about olive oil and citrus fruits. Maurizio Bufi was awarded his first Michelin Star in 2018. Originally from Apulia, he has always been very keen to use Mediterranean products, pla-cing them next to the local Gargnanese ones that form the heart of his menu. His approach to cuisine suits the unique lake, which amazingly acts as a sea and creates the temperate climate that enables exotic produce to grow here.  Since 2013 Bufi has been working at Villa Giulia and in just four years he gained Michelin recognition. The milestone arrived expeditiously for the exe-cutive chef, thanks to his culinary vision: carefully selected, fish, top quality products are cooked quickly so as to maintain their special qualities.

The chefs of Gargnano, by birth or by adoption, are as inspired as they are inspiring. Fueled by their wisdom and experience, their passion is further fed by the infinite possibilities local prod-ucts offer. The chefs craft their cuisine and continue to ensure that Gargnano remains one of the most starred towns in Italy.

Interview with the La Tortuga Restaurant Managers
We sat down for a chat with Maria, Danilo and Orietta, the managers of the well-known “La...
Read more
Olive Cultivation
Compared to citrus cultivation, which requires complex work systems and high construction and...
Read more
Caper Cultivation
A further demonstration of the particularly favorable climatic conditions of the Brescia side of...
Read more
Citrus Fruits
Historically, it was mostly lemons that were grown for export, while sweet oranges (portogalli)...
Read more