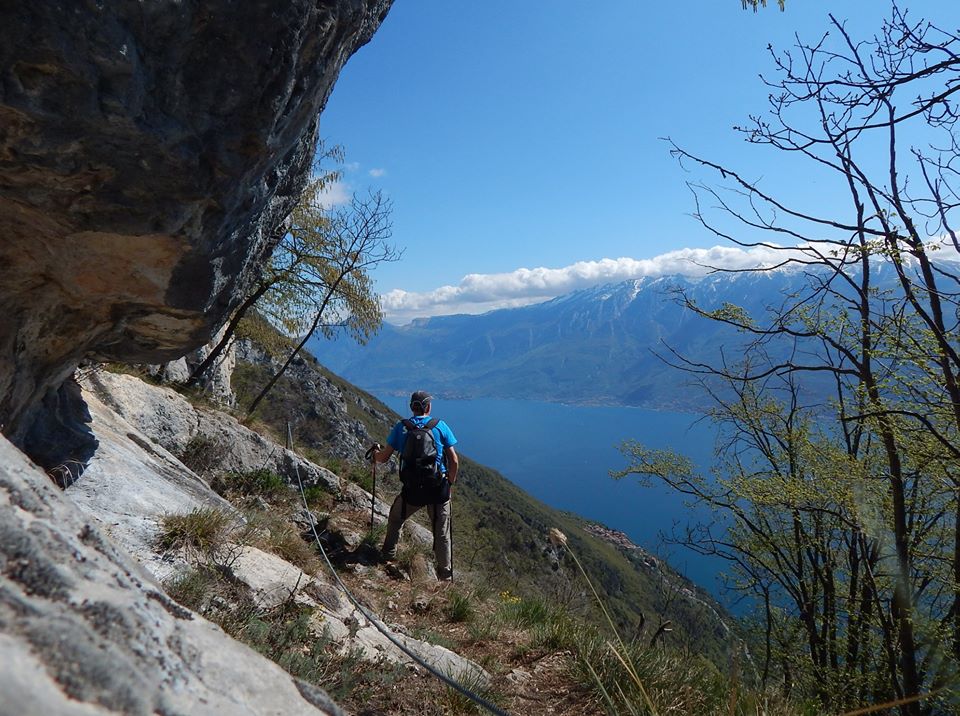 Traversing the mountain is a way to better experience its environment and understand the stories it tells.

The spectacular and solitary Senter dèl Luf, which in Gargnano links the town of Muslone and Briano to the slopes of Mount Denervo (trail marker N.45, soon to be N.231B), has an evocative story to tell, the story of a tragic disappearance and a rebirth.  Have you got a few minutes?  We will tell you…..

Emilio did not know what would be in store for him on that bright August day …. He got up early, at dawn, and put a water bottle and a few other items into his backpack.

An adventure awaited him, a dream that he had secretly been meditating on for some time.  Dressed in a white, long-sleeved shirt rolled up to his forearms (it would not have been acceptable to merely stay in his undershirt, as he still had his dignity to defend….), he excitedly started to climb the steep mule track that leads from Bogliaco towards Sasso and further beyond, his intention to reach Mount Denervo’s mountain pastures.

At Cascina Piazze, a wonderful little corner of paradise, some of his friends were enjoying their holiday together, celebrating the traditional Madonna of the Snows Day, August 5, 1911, which that year fell on a Saturday.  After the mass held in front of the chapel, Emilio thought about how it would have been nice to lie on the lawn outside the farmhouse, snacking in the company of the farmers and valley dwellers who had also flocked to Muslone for the occasion.  Though he wanted to spend the day with them, he felt that he could celebrate only after having completed his adventure.

Once in Briano he left the quiet path and moved on towards the more impervious side of the mountain, which faced a precipice on the lake, in order to access Piazze from that side. He was imagining the surprise and the compliments he would receive from his friends as he proceeded at a brisk pace towards the mountain, the sweat of his fatigue absorbed by his handkerchief and the footpath. He agilely avoided the donkeys and mountaineers coming down the trail from the opposite direction, carrying their loads towards the lake.

The Pas dèl Luf trail, of which he had heard stories, was a path that both inspired respect and allured him, he who was so young and adventurous. Winding sideways down the slope of the mountain, the trail had always attracted more goats than humans. The glistening lake below seemed to pull the path in towards it.  He deviated from the trail just before the prominent Dòs da Te and, urged on by the stories of the mountaineers and his dream to climb among the ravines of the white rocky walls, he arrived at the woods with its branches protruding above him and from where a farmhouse could be seen. In his personal library he had read about the exploits of climbers who had become famous for their conquest of one of the most important peaks in the Alps, in reading about them he felt akin to them… So he set off, veering left, to begin his ascent towards the incision in the rocks, the wild animal tracks demarcating the way. He proceeded calmly and cautiously, up to a jag of rock and then another...when all of a sudden he fell, shrieking, backwards! He regained his senses, stunned by the impact and fright, and felt great pain all over his body. He observed his battered legs, his ankles swelling. He screamed, but his repeated screams were carried off on the wind, left unanswered. No one could hear his cries from that impenetrable area. Gathering up his strength, he decided to slowly crawl back down, at least to the path. At that same moment in Piazze the lively party was continuing on. His friends were starting to wonder why Emilio had not arrived yet... perhaps, despite his promises, he had changed his mind and decided to stay at his home on the lake. It was not until later that evening that his family, still not having seen him return, began to worry seriously. They family knew his target destination, but not his precise itinerary, so in the morning a rescue team retraced the tracks following the most logical route, hoping he had simply stopped to sleep in Piazze. Upon reaching the Rasone building, they confirmed that he had passed by there, that he had stopped to rest in that spot; they then followed the traces from Briano to the Premaur Pass and descended to the farmhouse, but learned that he had, unfortunately, not made it that far. On their way back from the farmhouse, they searched more thoroughly, closely following the clues of his hike while repeatedly calling out for him, but to no avail. They returned to search the following day, but their hopes were waning.... It took a few days for them to spot the patch of Emilio’s white shirt from a telescope positioned at the top of Comer, looking down at the cliffs below.

Years passed, decades, then around the 2000s the mountain population was dwindling and its Pas dèl Luf footpath, for those who still remembered it, had been relegated to a mythical entity. Mrs. Candida, the long-time manager at the Osteria di Muslone, kept a distant memory of and fear for that path among the rocks.  She reverently talked about it when we stopped at her rustic home and inn, having just returned from surveying the area to map its trails. The forest near the village had reclaimed much of the belt above the area.  Once cultivated and maintained, it had been neglected for years until finally a fire withered the plants and forced them to grow back from their roots, erasing the paths.  Furthermore, many stones had fallen and blocked the way; one would have to be stubborn and mad to try to look for the path, Mrs. Candida warned us, as she shook her head. But this was our challenge: no one remembered where the path originated and so we just had to find out! In paying careful attention to the traces left on the ground and navigating around the vegetation, we made various unsuccessful attempts (some deviations led off road…) until we were finally able to reach the promontory known as Dòs da Te (the elderly remembered how its name probably derived from fact that bird nets once were stretched out along the area and the name for that place took the word for that net system from the local dialect), but there our search ended. After that point there were only rocks and scree, with no signs of the path. We tried again from above, descending from Briano, moving carefully and aiming towards the promontory in the distance below us. In some points we unearthed a trace of the path, to then lose it again to the stones and wild bushes.  Our drive to reach the curious dark hollow of a cave between the rocks guided us. Finally we managed to link together the path, but to call it a path was an overstatement, as no one knew where the real trail passed... We decided that there was no need to continue insisting on finding it. Then, a few years later, as we were guiding our friends from the speleological group up the trail to the cave in the rocks, hoping to find a new ravine to explore…We arrived near the cave after great effort and saw just before us a great wonder, a discovery! Below, among the rubble of stone was a plaque bearing the inscription:

In memory of Emilio Parisini, aged 23,

victim of his daring and courage,

We did not know about his story from so many years before...what his tombstone was doing in that forgotten place? Interested to learn more, we went down into the village and asked the Parisini family  members for information and were directed to an elderly relative. He remembered the story well and described how the young man had been found, barefoot and lifeless, on the Senter dèl Luf path amidst the desolate area. Emilio died chasing his dreams; if he had survived, he may have instead suffered the horrors of the tragic war of 1915-1918 just a few years later… Perhaps his end was better for him? For our part, having rediscovered the plaque, we had proof that the path passed through those parts, fulfilling our dream to find it. Devotedly working to cut branches and shrubs, dig and hoe, and make dangerous sections safe, we restored the trail and shared its joy with others. Even now, on the first Saturday of August, Piazze continues to celebrate the simple Madonna of the Snows festival, which Emilio could have only imagined. During the annual event some still remember his story, the story of the young man who would never again reappear amongst the living.

Thanks to my companions in adventure, Fabio Castellini and Mario Nisoli.

Fishermen Are Born on Lake Garda
In Gargnano fishermen’s bearings rotate on a unique clock: the lake sets rhythms.  The...
Read more
The Lemon Groves of Gargnano
The Gargnano landscape is characterized by its traditional citrus farms, introduced in the...
Read more
Gargnano’s Inland Area
The Municipality of Gargnano occupies a vast area of 78 square kilometers, which includes  its...
Read more
The Alto Garda Bresciano Park
Gargnano is one of the nine municipalities belonging to the Alto Garda Bresciano Park, which was...
Read more