Fishermen Are Born on Lake Garda 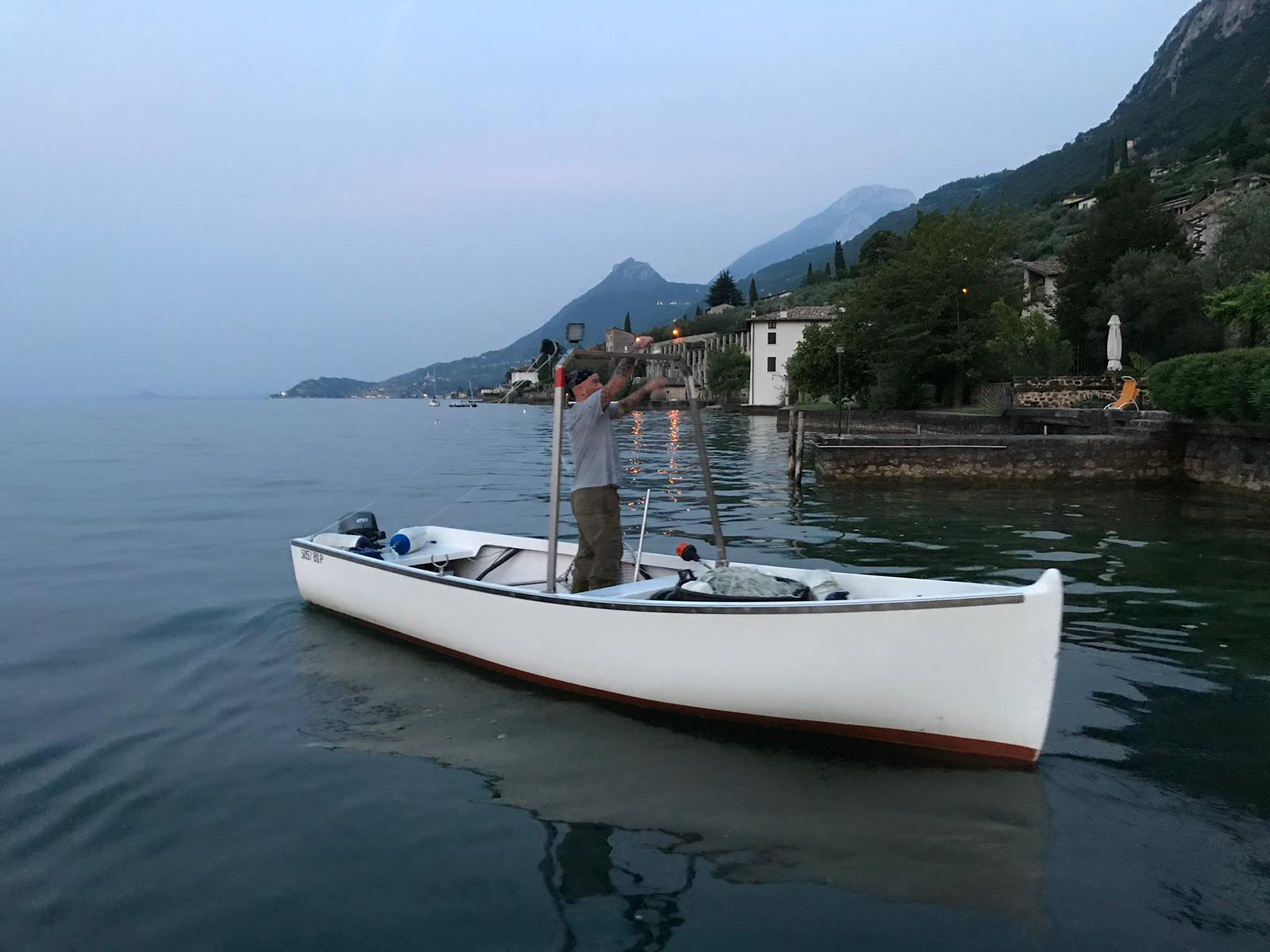 In Gargnano fishermen’s bearings rotate on a unique clock: the lake sets rhythms.  The hands of the fishermen, like those of the clock, are regulated by the slow, swimming whitefish in the deep.  The calendar marks annual celebrations by the rare days when carp let themselves be found.  Each day is repeated yet varies in the tiny details only those close enough to the fishermen can note.

The rigid rules of the lake are sometimes merciless. They are handed down through generations, shared through experience and require great sacrifice.  The sacrifice serves as the fisherman’s font of satisfaction: the way one can catch a trout whose existence is sensed by the “traces” it leaves; the fish that manage to evade capture every time, despite the hunting of the plunging nets, cast out and hoisted up to the boat by expectant hands; the illusory fish escape, the hands open, empty. The excitement, that drives each day and persists through the years, the fisherman’s expert hands feel with the sudden tension of the net, the jerk of movement from within the profound, dark depths.  Only he knows what he is thinking as he prepares his “bartabèl" (net) in the surreal silence surrounding the lake during those early morning hours.  From three o’clock on, with only the light from his boat, he faces the black, smooth waters that smell like home.

A sort of magic envelops the lake while everyone sleeps and the sole, discernible sound is that of the fishermen’s boats as they move away from the shore and towards their nets cast the day before.  The alternation between day and night gradually becomes tenuous.  It is, in fact, easy to learn their rhythms and adapt to their clock.

Everything originates from the demand for fresh fish.  The tourist market dictates the times; summer is the key season.

Waking up well before dawn is, perhaps, initially jarring until the shock can be overcome.  As eyes grow used to it, the magic begins. Only through experiencing it first-hand can one understand the emotions felt in watching the moon reflected on the black mirror of the lake’s surface as it disappears behind the Pizzoccolo and ushers in the first timid rays of the sun rising from behind Monte Baldo.  The best sunrises render the fishermen’s forms silhouettes against the fiery sky and life on the banks begins again.

If they are lucky and the wind has not blown during the night, Umberto, Luca and Marco collect their nets just before having breakfast with their families and delivering their catch.  Sometimes, however, evening thunderstorms happen and the lake plays tricks on them.  Its water churns and drags the nets kilometers, creating a challenge for the following day.  On bad days the fishermen go out, unsure when they can return.  They play hide-and-seek with Benaco, aware of their status as guests in the Garden of Eden, busy but carefully respecting and submitting to its rules.

Around midday the pace slows down: it is finally time to go home for a few hours' rest.  As the sun reaches its zenith and the beaches become populated, the fishermen recover through sleep.  By late afternoon they are ready to complete the last task of their day: to plow the lake again as they lay their nets.  This reassuring final gesture of their working day sows seamlessly into the flow of the following day.  The next day will be the same and different in its details and contingencies.

While listening to the sound of the waves from the fishermen’s pier in San Giacomo, I like to think of all those memories that the lake, in its depths, intensely guards.  From its cauldron, the echo of the planes that crossed its skies during the Second World War resurface, as do the desperate cries of those who were forced to leave their homes for the front.  When moving in closer and listening still more attentively, it is possible to hear the fatigue on the lips of the citrus growers hard at work on their lemon groves along the Riviera dei Limoni.  I bet that D.H. Lawrence, while living in San Gaudenzio and drawing inspiration from my ancestors for the characters in his book, “Crepuscolo in Italia”, enjoyed cooling off in its invigorating waters.

I always imagine him to be the same, assisting his spectators in watching history as a film: prehistory, Cenomans, Romans, Lombards, the Veronese influence and the lake split in two.  I imagine him as he peacefully witnesses the construction of port structures and castles, welcomes the viscount subjugation and the creation of the Republic of Venice.  I can imagine the waters turning red during the war between Venice and Milan in the fifteenth century and again, a few centuries later, during the Napoleonic Wars.  I can hear gunshots coming from the south during the wars of independence.  Up to the present day and without ever interfering, Lake Garda has accepted its multiple roles: from a source of subsistence to a border, it lends the area a Mediterranean climate, which continues to allow for the cultivation of olives and citrus fruits.

The link between the lake and the Frans family is strong, the fisherman family emigrated from Corisca to Gargnano at the end of the eighteenth century.  This “French” family (hence their taking on the surname “Frans”) and their traditions, which were passed down through the ages and arduous work, has become one of the symbols of Lake Garda.  And what about the future?  No problem: Giovanni, the youngest in the family, is training to carry on the customs of the Dominici home.  What better teachers than a grandfather, a father and an uncle who know the lake like the back of their well-worn hands?

From the blog, “Through Elena’s Eyes”

SENTER DEL LUF - A story
Traversing the mountain is a way to better experience its environment and understand the stories it...
Read more
The Lemon Groves of Gargnano
The Gargnano landscape is characterized by its traditional citrus farms, introduced in the...
Read more
Gargnano’s Inland Area
The Municipality of Gargnano occupies a vast area of 78 square kilometers, which includes  its...
Read more
The Alto Garda Bresciano Park
Gargnano is one of the nine municipalities belonging to the Alto Garda Bresciano Park, which was...
Read more